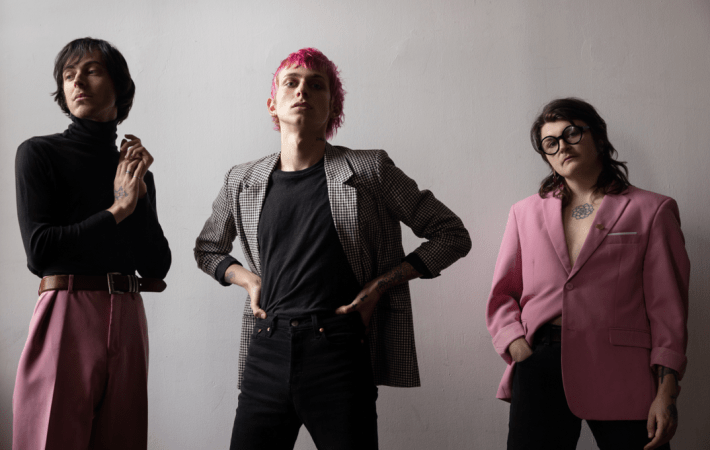 Can you possibly fall in love with the sound of a band based on only one song? Yes, you can, if the song’s anything like “Inamorato.” And if there was ever more proof needed that THUS LOVE is onto something exceptional, here it is. “Tandem,” the new single of the Battleborough, Vermont post-punk trio, demonstrates that there’s plenty of talent and substance.

Having followed their career since I first came across them earlier this year for the New Colossus Festival, I saw them playing a flurry of interesting places and shows. With captivating performances like these and singles like “Inamorato” and “In Tandem,” it doesn’t come as a surprise that THUS LOVE will go on tour supporting Viagra Boys and Shame. The latter, I’ve seen live three years ago in Iceland and was blown away by their live show. So, if you are anywhere close to a place where these three will play together, get your tickets now and thank me later.

Written in 12 hours of digestion of emotional turmoil, “In Tandem” is a sonic promise to hold awareness of a fundamental truth: we are nothing but star-dust.

The three self-identifying trans artists share a common vision and have lived together under the same roof since the band’s inception. Echo (she/her), Lu (he/him), and Nathaniel (they/them) designed and produced their own merch and even created their own recording studio from scratch, about which Echo says:

I realize that most artists don’t live this way, but for us, it was never really a choice. The art we make is so tied to who we are and the community we’re a part of, that this is the only way we can possibly do it.

This close bond comes to fruition not only live but also through their upcoming debut album Memorial, out on October 7th on Captured Tracks. For now, let’s enjoy “In Tandem” together with its brilliant video, which is directed and edited by Erin Vassilopoulos and filmed by Daryl Pittman.

Listen to the explosive and super catchy “In Tandem,” our Song Pick of the Day, and check out the video too:

Connect with THUS LOVE and add “In Tandem” to your playlist as we add it to our #glamglarepick playlist on Spotify and AppleMusic: