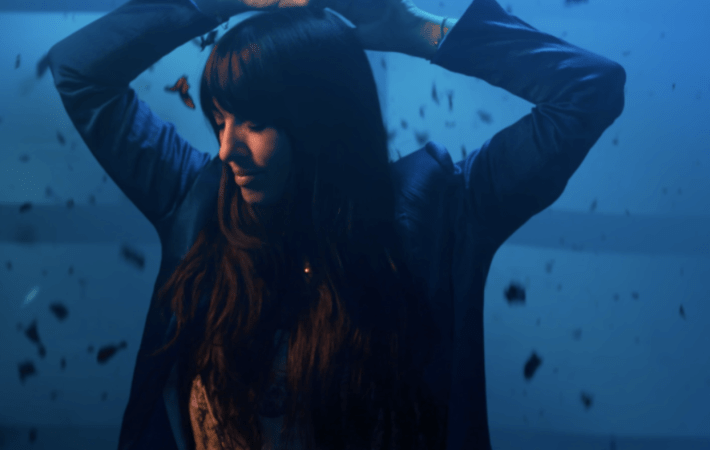 Big synth chords and powerful, propulsive drums get me every time. They’re an instant nod to the sound of the 80s and a wistful but glorious reminder of what I enjoyed listening to and dancing to in my youth. Liz Cass is on glamglare’s radar since her first two singles, “Human” and “Shaken” and with “Near Miss,” she’s offering us yet another magnificent masterpiece of her upcoming album. Her debut record, The Words, will be out November 11th via Ultra Records.

“Near Miss” is about not wanting to give up on someone when they can’t figure out what they really want. When you’re not ready to let go but have that need to be able to look back and say you gave it everything you had.

And just like that, Liz hits the nail on its head. While she’s reflecting on her own experiences, the sentiment is, unfortunately, universal, and we all have been going through such an experience at one point in our life or even very recently. In the end, there’s nothing else we can do than let go and move on. For our own good. Liz adds:

The song shows a different side to me and comes from a less melancholic place. I was in a better headspace when I wrote ‘Near Miss’ and wanted to reflect that with some really uplifting pop. There’s no more wallowing from me… At least for a while!

In the video, we see Liz upside down, flirting with gravity and reversed viewpoints while reflecting on conflicting feelings and embracing change. The music clip is directed by Conrad Gamble and shot around Liz’s favorite East London haunts. Listen to “Near Miss,” our Song Pick of the Day, and definitely watch the video too:

Connect with Liz Cass and add “Near Miss” to your playlist as we add it to our #glamglarepick playlist on Spotify and AppleMusic: