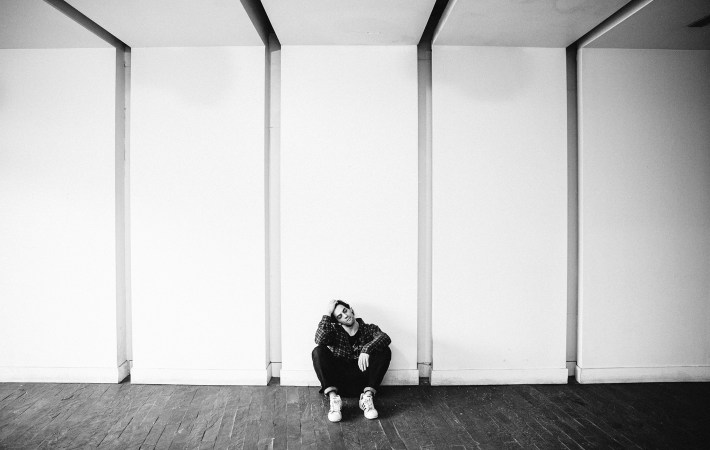 We are excited to premiere “Purgatory,” the new single by Brooklyn-based singer/songwriter Couvo and the last song to be released from his upcoming album, The Drinks Are Always Free in Purgatory. The gorgeous “Purgatory,” is a slow-building track full of longing and the burning desire for change. “Purgatory” makes for the perfect companion whenever you feel restless or discontented with the world, thanks to a passionate coziness that will brighten your day. We asked Couvo, née Josh Couvares, about “Purgatory,” and he says:

I started working on this song while I was away in Los Angeles. Which is funny, because it’s one of the most Brooklyn things I’ve ever written. I see it as the clearest distillation yet of all the years I’ve been living here: the dive bars, the wasted nights, the overall sense that we’re all living in some kind of purgatory. But there’s also this deep yearning in the song for something to change, and change fast. It was this dichotomy that sparked the rest of the songs I wrote for the album.

That sounds intriguing, and we really dig the warm early 70s rock vibe of “Purgatory,” and wonder what the album might be like. Couvo offers:

The album is about living in that kind of purgatory. But it’s also about how we manage to find our own salvation.

To find out more and to dig deeper into the album, come out to Brooklyn’s Sultan Room and celebrate with Couvo when he performs there tomorrow. Get your tickets here. Listen to “Purgatory,” our Song Pick of the Day and exclusive premiere:

Connect with Couvo and add “Purgatory” to your playlist as we add it to our #glamglarepick playlist on Spotify and AppleMusic tomorrow, when the track will be released on all DSPs.