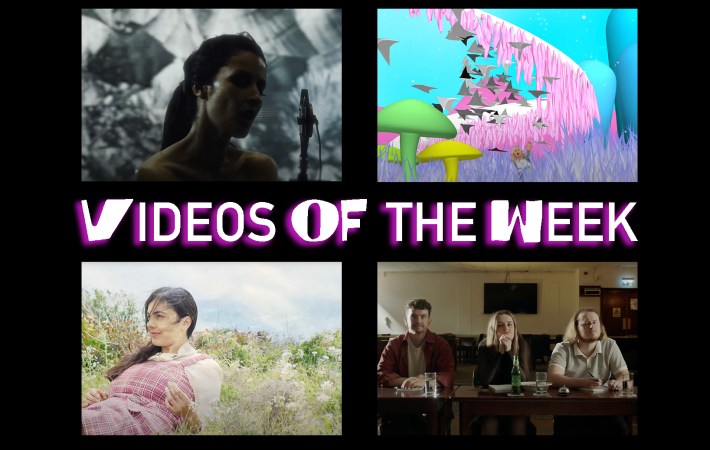 London artist Blixie Perestroika released her video Swing with her debut album Ambition is Low last Friday. The song is moody and dark, and so is the video, full of symbols of unrest and upheaval.

Blixie says about the song:

“It might sound angry but it’s really yearning. Sometimes you can’t say something to someone directly, because they won’t hear you. So for me, it comes out in music.”

Ahead of the debut album of indie-folk artist Hailey Beavis comes her gorgeous new single “Crow,” accompanied by a lovely, imaginative video. “Crow” marks the first single from i’ll put you where the trombone slides, out due on November 4, 2022, via OK Pal Records. Asked about “Crow,” Hailey says that it was written in a moment of clarity and explains further:

Looking back at my life, I could suddenly see the pattern, and I felt like the wrong type of animal, always trying to fit the mould and be something for somebody else. But at some point you have to accept your own true nature instead of trying to make it small and hidden. You have to be uncompromising and you have to walk away from things.

I LOVE this! Yes, even if it hurts, we must stick to our true selves and walk away from something (someone) that doesn’t lead anywhere.Ii can’t wait to listen to Hailey’s album because she completely enchanted me with “Crow.”

Sandmoon – Where Do We Go from Here

Beirut-based band Sandmoon is known for releasing gorgeous videos with their singles. For the new song Where Do We Go From Here from the upcoming album While We Watch the Horizon Sink, out on November 4, director Lujain Jo created a beautiful collage out of loving memories.

“Where Do We Go from Here” is a melodic indie pop song about seeking guidance from a trusted person. The person might have a mental condition (like Alzheimer), yet it is her guidance within, her guidance to our hearts, that is sought.”

Slaney Bay – I Could Love You Better

Great songwriting and skillful, appealing delivery doesn’t grant success. This wasn’t the case thirty years ago, and it is even less so in the age of streaming and endless competition. Yet, South-West London indie-rock trio Slaney Bay seem to find their niche. After their effervescent “Take Your Time,” they just released the catchy banger “I Could Love You Better,” complete with a witty, inspired video. This is what I want to see in a video: tell a story but don’t distract from your song, show me your band, and let your music shine. Bravo! I wish I could meet Cait Whitley in person, who seems rather enigmatic. She explains the vulnerability and difficult emotions within their songwriting:

“I Could Love You Better” details uncertainty about sharing your feelings for someone. You think you’d be good together, but you’re worried about losing the friendship if it goes wrong.