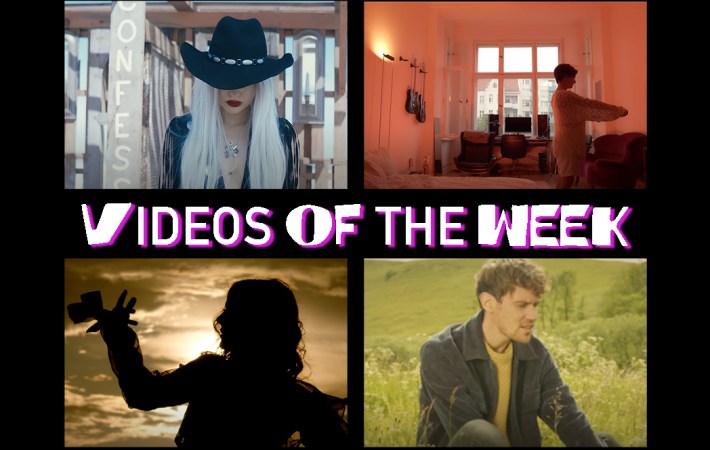 A woman in a Goth-inspired outfit with long, platinum blonde hair and a cowboy hat has my immediate attention. Always. No different with DEVORA, who’s tackling spiritual powers and religion with her latest single and video, titled “God Is Dead.” She says about the track:

There’s a lot of metaphors in here and it all starts with walking through a desert ghost town and seeing a “sign”. Whether it’s questioning religion, questioning life or questioning yourself, I think everyone had a moment over the last 2 years where we’ve put our heads in our hands and said “I think the world is ending, and if I didn’t believe in a higher power of any sort before, I certainly don’t now.” No matter what you believe in, or if you believe in anything, I think we’ve all asked those hard questions internally and I wanted to convey that in the song.

Well done! Sometimes, in order to really bring a point across and to make people pay attention, you have to be bold and provocative. “God Is Dead,” is a fantastic country-tinged, dark rock song accompanied by very appealing visuals.

“Where do you go when you’re lonely,” sing German/Swedish siblings Havet, craving safety from the unknown. The Jan Kassimatis-directed video shows the situation and the sisters themselves with gripping simplicity when even familiar places turn cold and strange.

RVBY MY DEAR – Over It

LA, via Australia, singer/songwriter Gabbi Coenen aka Rvby My Dear chose a beautifully morbid setting for the video for her new song Over it. She says about the inspiration for the video directed by Maty Young:

“I’m a huge fan of Madonna’s late-90s Ray of Light era, especially the music video for ‘Frozen’, and I’m also very inspired by haunted house stories and old film noir westerns like ‘The Night of the Hunter’, so those were definitely the starting points for the concept of this video. Even though this song has sexy slow-jam vibes musically, I wanted to shoot the video in an abandoned location to symbolize the death of intimacy in a relationship.”

Rvby My Dear will release her new self-titled EP on November 18 via Spirit House Records.

Scottish singer/songwriter Tommy Ashby delights with the energetic, playful, and utterly charming “A Beautiful Day.” Asked about the song and the visuals, the artist says:

“A Beautiful Day” describes how your memories can change in the remembering. Your recollection of a beautiful day changes over time, some details fall away and others come more sharply into focus. I also wanted to show how experiences are shaped by your mental state at the time. For example, the final verse describes rain on concrete, which wouldn’t be a classically beautiful scene. But the words and music that envelop the scene mean that it is remembered wistfully. The verses describe snapshots of beautiful days, which is often how I remember things. My mind is definitely more of a camera than a video recorder.

Such a spot-on observation, wrapped in a beautiful song and video! Watch the video, directed by Fraser Taylor, now: