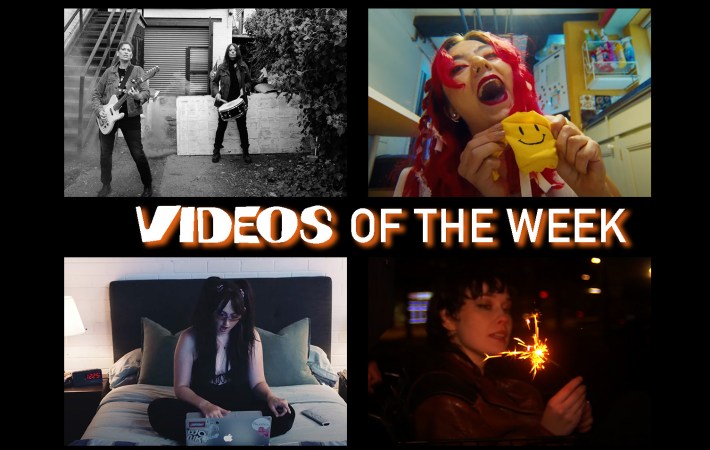 Deux Furieuses – Our Day Will Come

A hopeful power anthem, “Our Day Will Come,” marks the final track of Deux Furieuses‘ upcoming album Songs From Planet Earth. Asked about the glorious song, the duo says:

“Our Day Will Come” was written during the COVID-19 pandemic at a time when we couldn’t sing out loud for fear of aerosol transmission. ‘Sing it out without any fear’ was hope for the future.

I think many of us can relate, and here at glamglare, we truly dig the music video with its carefully displayed anger yet its overall vibe of letting hope and optimism prevail.

Eaves Wilder – I Stole Your Jumper

19-year-old London-based singer, songwriter, multi-instrumentalist, and producer Eaves Wilder just signed with Secretly Canadian’s and released a brilliant new single and music video. Eaves directed the video together with her older sister, Dora, and they storyboarded it when they were still living at home. It is inspired by Thelma and Louise, with elements of Meet Me In St. Louis, Chitty Chitty Bang Bang, and Victorian fashion. Their aim was to create a video that was as silly as the song and had a lot of fun coming up with ridiculous ways to destroy the sweater. Eaves says:

Getaway-driving in a convertible, hair flying in the wind. but instead of riding off a cliff, I just sat on a toilet and sang, which is what I think they should have done. Would have saved a lot of hassle.

For the first time, Eaves didn’t record in her bedroom but in a professional studio and co-produced “I Stole Your Jumper” together with Andy Savours (Arctic Monkeys, Rina Sawayama). With a song like this and previous releases like “Won’t You Be Happy,” “Man, He Was Lonely,” and “Mother in Your Mind,” it looks like Eaves Wilder is an exciting new alternative talent to follow.

Unbelievable that the year 2000 is already so far out in the rearview that it triggers nostalgic feelings. Singer and producer Holliday Howe from Sydney, Australia, turns that feeling into a catchy hyper pop track and a fun video directed by Cameron Davies.
She says about the song:

2000 is about old friendships from days-gone-by. Most of my early childhood memories are from the year 2000. They are still so poignant and clear in my mind. My family was living in McMahons Point in Sydney – which felt like the centre of the world once the Olympics began. I remember going to watch the dress rehersal of the Olympic opening ceremony with my mum and falling in love with Nikki Webster and the under the sea theme. With the Olympics, there was so much optimism and still so much hope for the new millenium. That hope was within me too – I was so young and the life that stretched out before me seemed to be full of possibilities. And then life came along – nothing was as pure after that year.

The new song “Unbroken Thought” by Chicago five-piece Smut comes with an atmospheric night-time video directed by drummer Aidan O’Connor. While the song is about a love relationship, for the video, they adjusted the theme a bit as the band explains:

The music video hopefully reflects the kinetic energy of the song. We have the good and bad juxtaposed in fleeting moments over a phone call. We took a more friendship-centric approach to the music video than romantic because that sort of love doesn’t necessarily have to be romantic. When you find the person or people you’re meant to be with you know. We wanted to reflect the desperation that comes sometimes when you realize you need that connection.