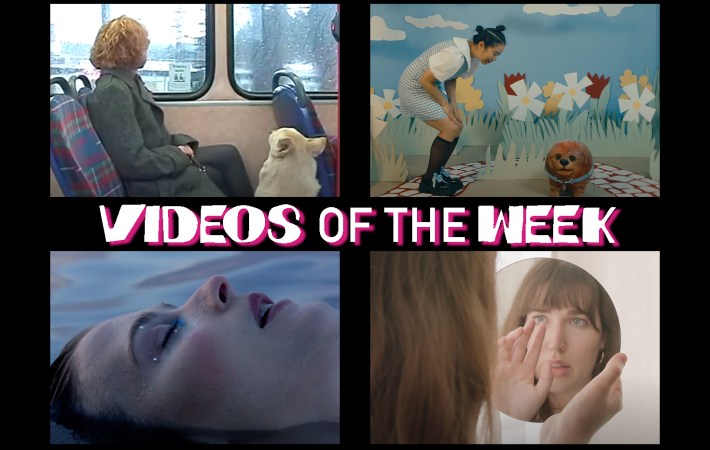 Three’s a charm, no? When we make our way through the flurry of new videos, and decide which ones take our fancy, then Hailey Beavis came up the previous couple of months twice already because we simply love what this Edinburgh-based artist does. We dig her new album I’ll Put You Where The Trombone Slides and naturally are excited to feature her latest music video too. In its visual and sonic vibe, “Blackbird” very much reminds me of Kate Bush’s “Cloudbusting,” minus the help of a Hollywood superstar, and 37 years since between when that video came out and today.

Turns out, Hailey had something different entirely in mind, because she says:

I wrote “Blackbird” one night in a rehearsal room. The stuttering existential refrain demands answers from an indifferent universe, as casio parts unfold and layer up over electric guitar. As I began writing it, I could hear so many melodies and countermelodies all at once. An early recording of this song hears me trying to find space in the song for each melody, between the twinkling of stars, ghostly choral voices and electric guitar. Check out the video, where I play a ghost hunter and the ghost… spooky!

Watch the video directed by Faith Eliott and Hailey Beavis now, and don’t forget to check out Hailey’s debut album too:

There is no ghost or peach in this video. There is a dog, but not a real one. However, Ellen Liu aka mui zyu’s charming if not bizarre video together with the eclectic music has a deep meaning as she reveals below:

“This song is about leaving your former self and entering your new peach skin. Peaches are considered a symbol of longevity and even immortality in Chinese culture. The protagonist has overcome enemies and has bruises to prove the damage. However the bruised peach becomes stronger by overcoming them. The song features guzheng samples that have been highly edited and mangled. We liked the idea of having an excellent musician improvise on the traditional Chinese zither and ‘bruising’ their performance with distortion and effects to create a new stronger sound with little of its former self present – much like the meaning of the song. The ‘ghost’ inside refers to the ghost we used to be, the ghosts we carry with us and the ghosts we have to overcome too.”

What got my attention first was Puma June‘s comment about working as a registered nurse. It’s rare that we come across musicians with such a demanding profession. The more I am in awe with “Lost Years,” Puma June’s new single and mesmerizing video. So pretty! And with so much meaning. Shanti Abbott, aka Puma June, says about her new creative work:

“Lost Years” is a song about my moment of reflection and realization: feeling the weight of aging and losing time to pursue my dreams, but finding the motivation and strength to reach higher and create a future that I can be proud of. It’s about reaching beyond the stifling nature of the conventional.

Hm… as someone who is easily twice Shanti’s age, I’d like to say: keep going. Keep pursuing your dreams and don’t be afraid of detours. This is all very, very promising.

In her new EP Crescent Welsh musician Elin Edwards aka Thallo copes with overcoming a sudden illness. While the music and atmosphere in the video seems light, it comes also with heavy symbolism that gives the viewer a glimpse into what she went through. Elin says:

“I wasn’t as good a friend or girlfriend as I had wanted to be. I wrote the song upon realising I wouldn’t get the chance to ever make up for that imbalance and was left with the guilt of feeling indebted.”