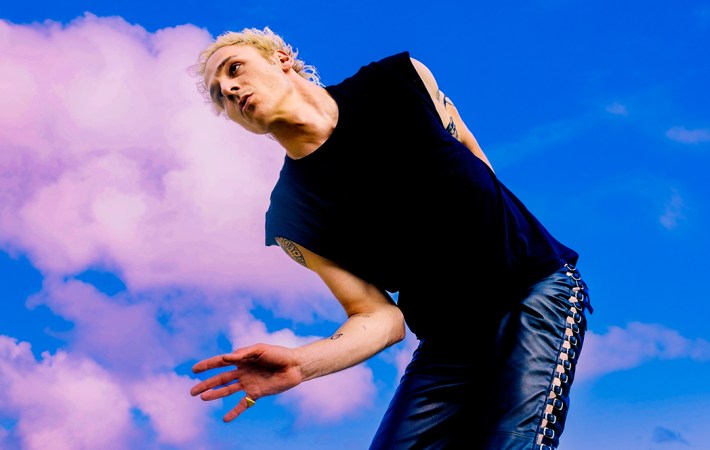 It’s a very fine day when a song like “Mr. Rocknroll” drops. Add an aesthetically pleasing and entertaining music video, and your day is made. “Mr. Rocknroll” is the new, absolutely brilliant single by songwriter, singer, and multi-instrumentalist Sam Himself. When not touring, Sam can be found in his home country Switzerland or his chosen other home in Brooklyn, NY.

The beauty of “Mr. Rocknroll” lies in its catchy hook and irresistible vibe that draws you in from the very first beat and keeps you engaged throughout the song. Sam’s smooth baritone vocals possess just the right edge to lure you in and stay interested in what’s coming next. The song’s off to a grandiose start with a lyric like:

But what pushes the song further into the territory of ‘genius’ is the actual music video, directed by Raya al Souliman, filmed by Horatiu Sovaiala of Romanian-Swiss Carnation Studio, based on a script by Sam Himself and YVY founder Yvonne Reichmuth. It sees Sam prancing through an empty Zurich café, his reflection in the mirrors the only feedback he receives.

The video tells a visual story with a fantastic flow and could become the gold standard for being the only star in a music clip, plus some -admittedly- very sexy leather pants. We also get a vibe that sits somewhere between mid-80s Bruce Springsteen and early-80s Billy Idol, with Sam having the body and perfect dance moves to pull off what he set out to do. He makes this look real and convincing. Bravo!

Sam Himself announced the European leg of his tour in support of his upcoming album Never Let Me Go; pre-safe the album here. We don’t even need to wait until next year to see Sam Himself because he’s playing Brooklyn’s Sultan Room on December 4th, hosted by Swiss label Taxi Gauche Records.

Watch the video for “Mr. Rocknroll,” and enjoy our Song Pick of the Day:

Connect with Sam Himself and add “Mr. Rocknroll” to your playlist as we add it to our #glamglarepick playlist on Spotify and AppleMusic: