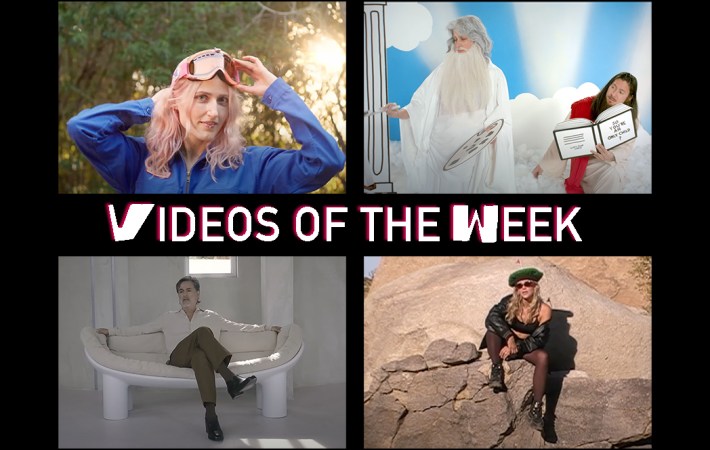 abracadabra – in a photo

Oakland, CA, band abracadabra falls out of the ordinary sonically and visually for their first song, “in a photo.” Disco punk, the duo calls their music, and for the video, they jump into a giant pencil and eraser for a soap box race. Fun fact: the pencil is artwork from 1975 by Richard Shaw and Gregor Weiss.

“’in a photo’ is a playful jab at the phonies of the world. On this one we really loved the way a fairly dry and doubled vocal added some tension to the melody, making it seem a bit less refined. At times you can sense the push and pull between the two unison voices, and we felt that added to the subliminal message.”

Andy Shauf – “Wasted On You”

You either love or totally dislike Andy Shauf‘s new single/video “Wasted On You,” with which he announced his upcoming album, Norm, out February 10th on ANTI (pre-order here.) We take the side of those who dig the clip because there’s more to it than meets the eye, besides, the song is such a pleasant little feel-good ditty. However, this is only, on the surface, an easy, simple love song because Shauf grapples with death and the legacies left behind in its wake. “Wasted On You” marks the album’s opening track and sets the mood for the concept album. The video is directed by V Haddad and written by Shauf, and is a playful depiction of God played by Lauren Servideo and Jesus played by Frederic Winkler.

We had featured Eddie Chacon with his recent single “Holy Hell,” and now the Los Angeles-based artist released the utterly irresistible and oh-so-laid-back “Comes and Goes,” complete with a super stylish music video directed by Sissy Chacon. The video also features producer John Carroll Kirby on keys and Logan Hone on sax and was shot on location in Ibiza, at Villa Can Rudayla. Eddie Chacon says about “Comes and Goes:”

This life can ever so slowly talk you out of who you are. You wake up one day and realize that you’re someplace you never expected to be.

I like to present Eddie as the dignified, talented, foxy, thoughtful gentleman I know him to be without any forced storyline to distract. In this purely gentle and serene environment, which cradled us like babies, we were able to create something simple and compelling.

Agreed! This is one fine piece of art, we don’t get tired of listening and watching. It’s a restoring mini-vacation right at your fingertips. Watch the video now:

“Green” is the color of hope that California-based singer/ songwriter Mae Mae wants to conjure here. And she is right – the currently prevalent pessimism needs more green as much as the desert the video was filmed in.

She says about the song:

“I wrote ‘Green’ in the midst of feeling pessimistic about the future. I wasn’t necessarily believing what I was writing at the time, but rather trying to change my outlook through the process of creating it. The song grew into its own thing that I feel really embodies the idea of looking ahead to greener pastures while sitting in the dead space of a creative rut.”