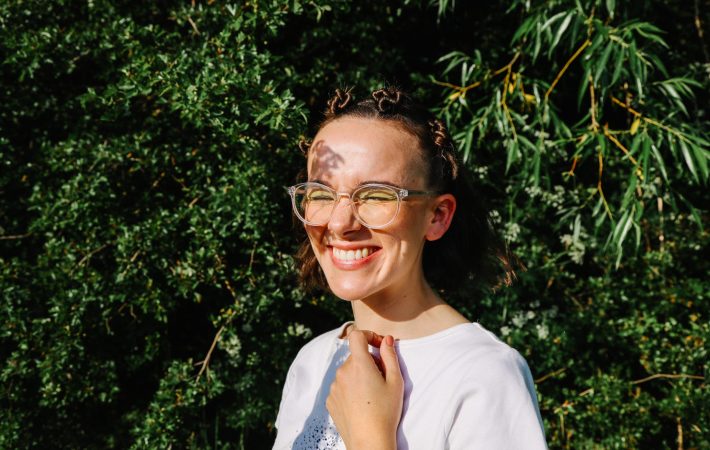 British singer/songwriter Morgan Harper-Jones takes my heart by storm with her new, utterly gorgeous single “Swimming Upstream.” I still have the quietly beautiful “Lie to Me” in my ears, the song that introduced me to her music. (The ‘lying’ is of course, not meant literally because only a few things are worse than a dishonest person!) Lyrically, “Swimming Upstream” is mostly fictional, and the idea came to Morgan when she was homebound due to an injury that took about 10 months to heal. As most of us experienced throughout the pandemic, being stuck inside sucks, even more so when you’re young and full of potential dates and places to go. But as an artist, Morgan knew exactly what to do with that experience when she met someone with a life-altering injury. This led Morgan to explore the life paths of people with life-impacting sufferings and how they were ultimately grateful for it. Morgan explains:

I’m not saying that bad things happen for a reason, I don’t think that’s very empathetic or even true. For me the frustration of what I was missing was hurting me more than the injury itself and opening up the idea that this could give me opportunities that I wouldn’t have otherwise made things calmer and smoother for me. It’s probably the first time I started to actively look for and appreciate what is, rather than obsessing over and struggling against what isn’t.

Recorded in Brighton, “Swimming Upstream” is one of the brilliant outcomes of ongoing sessions with producer Iain Archer (James Bay, Snow Patrol, Lisa Hannigan) and serves as a taste of what’s to come from Morgan in 2023. Exciting!

Listen to “Swimming Upstream,” our Song Pick of the Day:

Connect with Morgan Harper-Jones and add “Swimming Upstream” to your playlist as we add it to our #glamglarepick playlist on Spotify and AppleMusic: