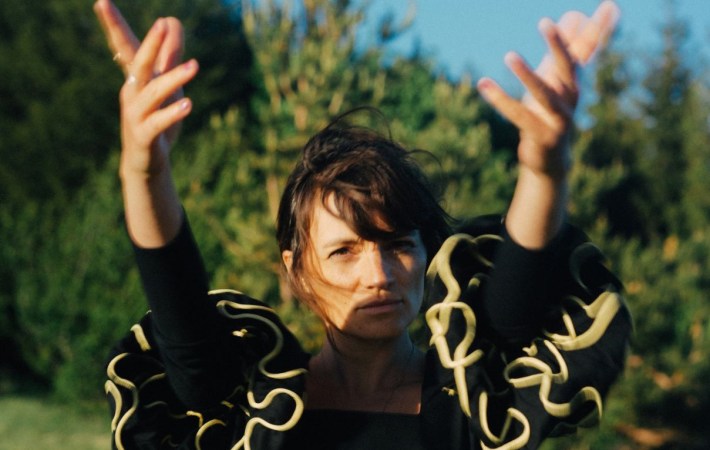 The singer/songwriter Halo Maud likes to sing in both French and English, but her new four-track EP Pesnopoïka centers around traditional Bulgarian wedding music. While our Song Pick of the Day, the title track, is rooted in western pop music, Halo Maud gives it her own special touches, like a warped guitar solo that instantly pull it out of the ordinary.

“I am very happy to be sharing my new song Pesnopoïka, accompanied by a video and a bouquet of three additional tracks. I’ve been interested in Bulgarian traditional music for years now. While doing some research on the subject I came across the word pesnopoïka, which I thought sounded beautifully and strangely familiar. I learned that in traditional weddings the vocal part of the music is almost exclusively performed by the women in groups. Except during the most festive moments when a particularly good singer is recognized as pesnopoïka and sings solo accompanied by musicians.”

Halo Maud shot a video in Bulgaria together with Adrien Selbert:

The Pesnopoïka video is both an homage to Bulgarian folklore and a blurred portrait of the mysterious pesnopoïka. I was finally able to go to Bulgaria in June 2022, during a series of festive ceremonies celebrating the rose Damascena they are traditionally cultivating. These ceremonies have been beautifully captured by Adrien Selbert, who I had already worked with on the short film Taking Flight in 2021. This time we wanted to focus on the texture of the video, for it to be like a moving painting; the colors melting, the dresses whirling and the dance patterns leading to a visual trance.”

Halo Maud will be back next year with her second album. Watch the video below or listen to “Pesnopoïka” on Bandcamp: