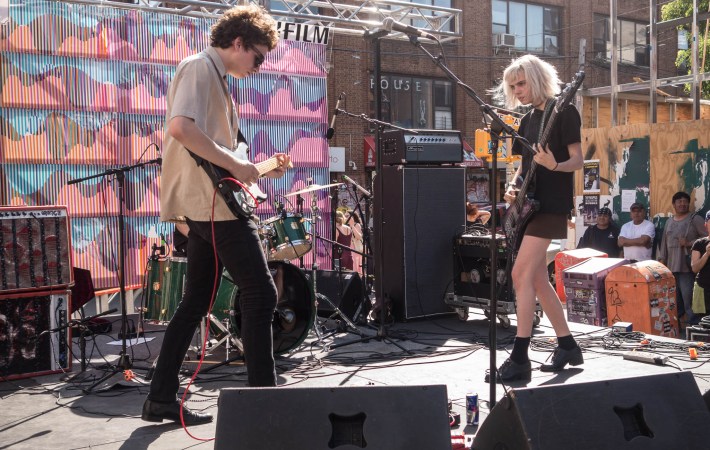 We got a great start into Saturday with catching a few songs by Sunflower Beans on the UO Stage right on Bedford Avenue. The New York three piece has been on our list for a while, so we were happy to see them, even in blazing sunshine.

Next on the same stage was Florida band Merchandise, who did one of Elke’s favorite albums last year. They also were the last and only all-male band we saw the entire day.

After a Mail Chimp sponsored happy hour at Kent Ale House we went to 50 Kent – the big outdoor stage of Northside. We were lucky – Bully from Nashville was on: two songs were enough to understand what the buzz around them is about. Singer/guitarist Alicia Bonanno is such a badass performer. On a side note: I was told by security to put the camera down. Really?

We went on to Muchmore’s, a coffee shop with a tiny stage, for a bite and some more music: The Present – an electronic duo with a truly ungoogleable name: I could not find out anything about them.

Back to the Black Bear, which has become something like out home base in the last four days (in fact, I’m writing this sitting at the bar there). DEF.grls were on: a Brooklyn three piece surf rock band, who are a lot of fun on stage.

Next, Little May from Sydney, Australia, featured recently in Elke’s #threeisaband series, were playing Rough Trade. They are signed by Capitol Records – for a reason: they do beautiful, catchy songs and have two great singers with Hannah Field and Liz Drummond.

After a brisk walk, we wanted to see Blonde Redhead at the Warsaw, only to be told that the venue was already at capacity for Northside badges. Bummer. But we were first in line and eventually, after around half the show we were let in. The wait was so worth it: they are legends and favorites of Elke and me.

The evening ended back at Rough Trade at a Bella Union party with Manchester band PINS, who just have released their second album Wild Nights. It turned out to be a wild night indeed with everybody, including Dum Dum Girl’s Dee Dee, dancing like crazy.