PHOTOS: Go!Zilla brought Fuzz Rock made in Italy to Palisades BK for Fuzz-O-Rama 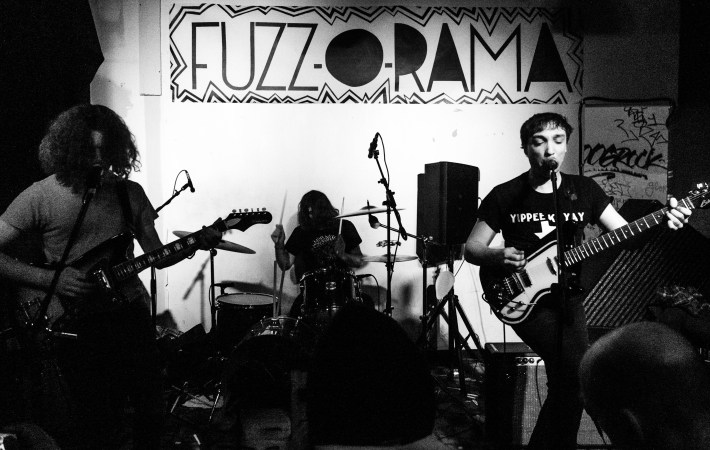 PHOTOS: Go!Zilla brought Fuzz Rock made in Italy to Palisades BK for Fuzz-O-Rama

This must have been an amazing Saturday at the Fuzz-O-Rama showcase with bands lining up in the early afternoon at  1:00 pm, playing psychedelic rock or fuzz rock, coming from as near as Albany or Boston, and from further away, from Europe with a band from Germany and Go!Zilla from Italy. We joined the party late in the game, basically only coming to see Go!Zilla, having featured them before, and boy, do they know how to put on a live show!

G0!Zilla comprised of Lando (vocals, guitar), Mattia (guitar, vocals) and Fausto (drums) have played on US soil before, and recently added another band member, Nikke on synth to their mix. Together, they got the audience dancing, head banging and expressing to having a very good time. It was great fun to see the four on stage, shredding their guitars, singing their hearts out, in English I should stress with a barely noticeable soft Italian accent. Like my fellow audience members, I would have wanted to see more of the good!

Lucky me, because I’ll have another chance to see Go!Zilla live in Austin for SXSW, because that’s where the four are heading, with stops at other cities too. They are very busy and in demand – rightfully so! Enjoy photos from the Fuzz-O-Rama party, watch a video and listen to Go!Zilla.

To get an idea, how incredible Go!Zilla are live, check out this iPhone video. You get a really good taste for what you don’t want to miss:

Listen to another hypnotic fuzz-rock gem: