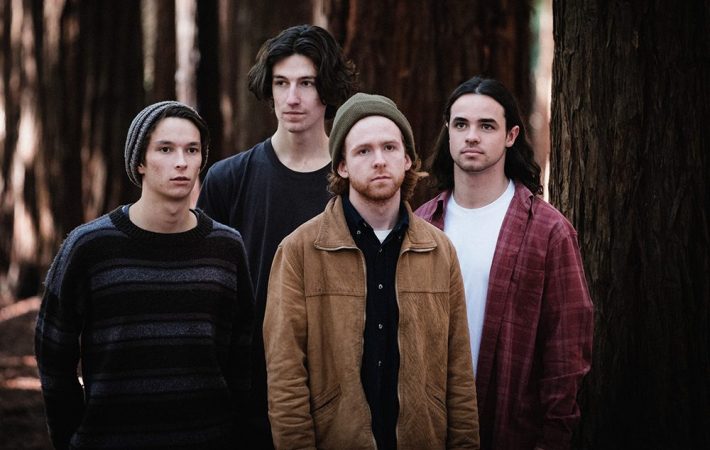 ‘Hauntingly beautiful’ comes to mind, when trying to describe Elk + Mammoth‘s recently released EP “Culprit” in only two words. There’s a certain melancholy to it with a sparse, guitar-driven instrumentation, and vocals that are a touch unsettling but at the same time super charming, and simply irresistibly unique.

I was immediately hooked when I first listened to the Melbourne based four-piece and wanted to know more about Tim Palstra (vocals, guitar), Ethan Berry (guitar, vocals),  Alex Anderson (drums) and Max Karklins (bass, piano, vocals) who together form Elk + Mammoth. Reading the band’s answers to our questions, it feels like we had the chance to actually sit together at one place and chat a bit about music, so lively and real!

Thanks so much, Max, Alex, Tim and Ethan for your time and insight:

What was the last song that got stuck in your head?
Max: It would have to be Lady (you bring me up) by The Commodores, I’ve got in on an old 7″ single that gets a regular spin at home.
Alex: Shake Appeal by The Stooges, Iggy is from another planet.
Tim: Giving Bad People Good Ideas by Death Grips. It makes me want to slam my head against the wall but I don’t even think that would get it out of my head.
Ethan: Dollar Days from David Bowie’s last album, such an incredible performance and composition from every angle.

Do you have a “go-to song” from your childhood, one you always enjoy hearing again?
Alex: Africa by Toto is one of those songs that stuck with me from first hearing it early on and Jeff Porcaro is masterful on the drums.
Tim: I think No More Heroes by The Stranglers will always have a special place in my heart after I first heard it on some Kingdom Hearts parody video when I was 9 or so.

What was the first album you have ever bought? And on which medium: digital, vinyl, CD or cassette tape?
Max: I bought Abbey Road by the Beatles on vinyl when I was 8 years old.
Alex: The first thing I think I bought with my own money was either an INXS or Nirvana greatest hits CD.
Tim: I reckon it might have been a Rage Against The Machine triple pack CD collection.

Is there a song you’d like to cover?
Ethan: We’ve toyed with the idea of covering the theme song from Daria, we always end up jamming it out in practice so it’ll probably happen very soon.
Alex: AFRICA!

What’s your songwriting process like? What comes first, melody or lyrics?
Max: The songwriting process varies a lot, but it’s always really collaborative. It usually starts with bits and pieces of riffs that we’ve jammed or come up with by ourselves and then we spend many hours together or in pairs to refine certain elements before nutting out the final arrangement in a practise space. We work best when we are writing together and we tend to almost write each other’s parts at times. There’s no ego involved because we’ve played together long enough so the general rules are that every idea gets a run through and at the end of the day we only chose to keep parts in that add meaning to the idea of the song as a whole. Tim writes the majority of lyrics and they are usually developed in tandem with the instrumentals.

If you could have any musical instrument in the world, which one would it be and why?
Tim: If I could get my hands on a theremin I would retreat to the woods and play around with it forever.
Alex: Damn! That’s what I was going to say, I love those mythical marvels.
Max: I played an old Paisley Telecaster bass that was owned by Steve Kilby of The Church (that our engineer now owns) on the EP and I would happily adopt it, such an amazing instrument.

Playing live, what has been your favorite venue so far? And why?
Tim: We’ve played The Workers Club in Fitzroy a heap of times and have always had a great night, otherwise we are really looking forward trying something new – playing in a warehouse space for our EP launch show.

What’s the most bizarre thing to happen while you were onstage?
Alex: Max surprised me one time by jumping through my drum kit at the end of the set…
Max: I forgot about that one, I was going to say the time I looked over to Tim in the middle of a song and he was kicking his guitar.
Tim: Yeah it’s still not fixed.
Ethan: It probably doesn’t beat the time an old guy walked off the street and into a show we were playing, he pushed everyone aside and started performing Tai Chi on the dance floor.

If I were to visit Melbourne where would you take me to see/hear great live music?
Ethan: There are so many great live music venues in Melbourne so it’s hard to name a few but a couple of our favourites are The Gasometer, The Northcote Social Club, Ding Dong Lounge and Howler.

If you could choose to live in a decade (music, style, etc.) which one would it be?
Alex: The ‘70’s for sure
Max: 2050
Ethan: I’m technically a 90’s kid, but being able to experience the music scene, not just crawl around in diapers, would have been phenomenal.
Tim: 2010s, specifically 2016 for eternity so I never stop experiencing the rise of Lil Yachty.

Once again, big THANKS to all four of you. Turns out, Toto’s “Africa” was stuck in my head for quite a while too, back then and the first album I bought was also one by The Beatles, “Let It Be”. Hope to see you guys live one day, because from what I heard, your live shows are amazing!

Stream the superb EP “Culprit” in its entirety on SoundCloud and listen to the title song “Culprit” here: