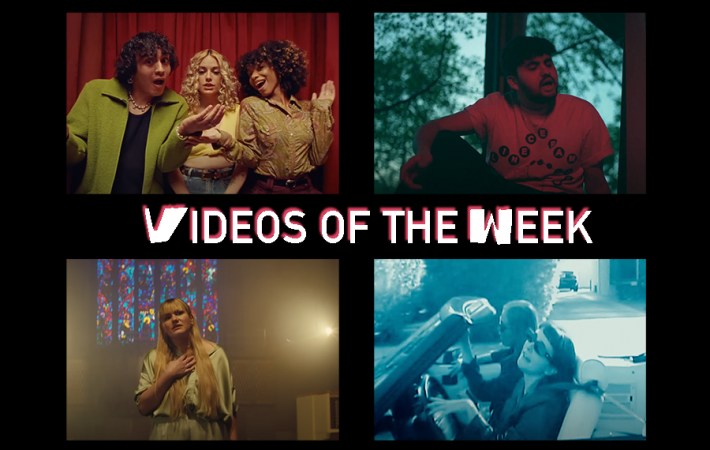 Ashe – Shower With My Clothes On

L.A.-based singer/songwriter Ashe is not in a good place in her video “Shower With My Clothes On” – literally. While she is dealing with serious issues, others were having fun right around her.

Ashe says about the song:

“‘Shower With My Clothes On’ is what my head feels like when it’s spinning; out of control anxiety and the world feeling like it’s closing in on you. It’s about remembering those last few moments in a relationship when you’re hopelessly hanging on but know you have to let go.”

The video is directed by Jason Lester.

Mike Baretz – Take It That Way

Sometimes, it’s simply the feel of a music video that draws you in. The slow pace, the peacefulness, like we’re wandering together with Jersey-native Mike Baretz through the woods and the lovely house he’s staying at/singing from. Known to fans as songwriter and producer, Mike is now also putting his vocals to the test and steps into view himself.

I think we’ve all felt at times that we can cling to the things we are close to even when we can see the flaws and shortcomings staring right back at us. ‘Take It That Way’ is about trying to hold on to that person despite seeing all the cracks in the foundation. It can be so easy to ignore all of the downsides and just latch on to the familiarity and comfort of someone you care about, even when it may not be working.

The music video is directed by Kyle McCartney, shot by Matt Degraff, and written, and produced by Mike Baretz.

Maddie Zahm – If It’s Not God

The song is great. The video is intriguing, and it took me almost to the very end until it really all fell into place for me. And still, I wasn’t sure. Only when I really listened to the lyrics and read more about Maddie Zahm‘s background and her intentions I began to understand:

It’s best to let Maddie speak for herself:

This song was kind of a shock for me to write. I was at a session with my friend Brian Brundage and we had tried so hard to write about a girl I had been talking to but nothing was coming to my mind. I am stubborn and usually if it takes more than an hour to write a song, I dont think it’s supposed to be on my project. It hit hour five and I was about to give up and so we just had a closing chat about our lives. We touched on the topic of religion and I started hearing a single note on the piano and Brian started playing it. We talked about our deconstruction and it was truly so incredible to finally be able to talk to someone safe about my experiences in the church. I left that session and sent it to my best friend Shawnee who had left the church a bit later than I had. I remember the reaction from both her and my publisher made me realize how special the song was. I was worried it seemed anti church/God but the more I have sat with it the more I realize it leaves so much room and space for me to believe in whatever I want.

Reading the comments to the video, Maddie is clearly opening floodgates! “If It’s Not God” is taken from her forthcoming EP You Might Not Like Her, out August 12th via AWAL.  Directed by Gus Black

For “atonement,” L.A.-based dream pop act Winter collaborated with Australian singer/songwriter Hatchie. Both have fun doing what everybody would do when visiting L.A. in the video. But the choice to shoot in monochrome adds some mystery to the clip. Samira Winter says about the song:

“Every time I hear this song a new version of the story plays out in my head – an escape, a mystery, a forbidden love. By the time it reaches full climax there is a big reveal – the secret is out, the we discover who committed the crime, the two lovers find each other.”

Winter’s second album “What Kind of Blue Are You?” is announced on October 14 via Bar/None Records.