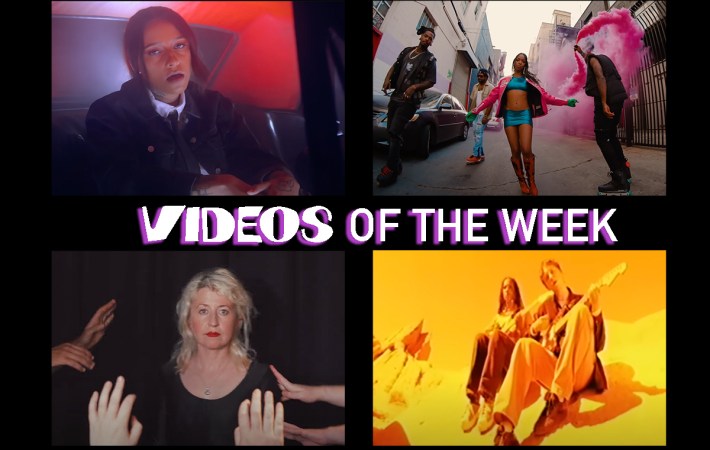 LA-based singer and producer Amber Ryann is on the run in this dark, nocturnal video. “‘Said Than Done’ is about the desire to move on from past trauma whilst realizing it never served you, but as the title says, that is always easier said than done,” she explains.

NYC musician BAYLI messed up with her girlfriend and needs to get a puppy and organize a solo show for her. That is a tall order, but she is ready to do what it takes to make her love happy.

” ‘act up’ is an ode to love!. Of course, like so many of my other songs, its steeped in gay idioms and innuendoes and feels like a magic carpet ride through my own dreamy, campy audio utopia. In this song I’m singing to a girl who I am totally smitten with and the song describes the up and down roller coaster of dating someone who is strong, sexy, independent and a go-getter. Sometimes she’s the chillest, kindest and “coolest” girl you’ve ever met, but if you push her to her edge she knows how to turn up and get feisty, as true bad bitches do. This song is about loving your partner through all the moments.”

Watch the video, written and directed by Kimber-Lee Alston, now:

Hailey Beavis – Anything that Shines

We love Hailey Beavis and cannot wait for her album I’ll Put You Where The Trombone Slides to drop on November 4th via OK Pal Records. The video to her previous single “Crow” took us by storm, and we’re enchanted by her newest work too. This is a truly unique artist, carving out her own niche topped with an irresistible appeal! Asked about “Anything that Shines,” Hailey says:

“Anything that Shines” is a nod to my community and to friendship, the resounding forces of good in my life. Every time I have spiralled out I have been able to return, and I have been that for so many friends also. This is the thing that truly shines. It’s about the time spent chasing miss-decision, like a moth to the flame, getting burnt. As I grow older my priorities are changing and I want to shape my days, and enjoy impulsivity without being wholly guided by the chaos of it.  Think of a fantasy movie where everyone is trying to get to that sparkly orb of light, well I just dropped the ball and it’s a relief.

London-based duo Jadu Heart, comprised of Diva-Sachy Jeffrey and Alex Headford announced their third album Derealised out January 20th via VLF Records. The atmospheric “I Shimmer” is a cut from the album and it comes with a warm and fuzzy video; the band summarizes the song’s theme in a tantalizing one-liner:

“I Shimmer” is about that mania you can feel after a low.

We can both go to dark places from time to time but there’s always a moment where you see a sliver of light and you’re like ‘fuck it, let’s go towards it’. It’s that journey from hopelessness to nihilism where you feel you can not be stopped. Where you follow a moment of clarity.