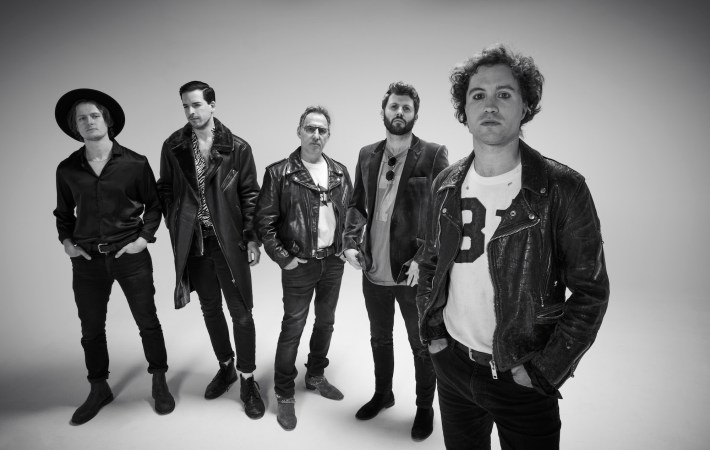 London’s five-piece The Horn released today the last single and title track of their EP Do It Now. The upbeat “Do It Now” is the most energetic song of the album and a glorious piece of eclectic indie-rock. I’m always drawn to motivational anthems especially when they come with a fun and inspired band video like it is the case here.

Nick True (Friends of Gavin) founded The Horn and can look back at touring with REM or headlining The Smiths’ first London show. With The Horn, Nick is able to relive his 20s alongside four fantastic musicians: multi-instrumentalist Danny Monk, keyboardist Ed Cox, drummer Alex Moorse, and singer/guitarist Jonny Taylor.

“Do It Now” was initially written by Nick True on an acoustic guitar alone in his living room, musing about his attitude to living life to the fullest. It struck him that we often lose focus of what’s important particularly since we have only one shot at life. Isn’t that one of the biggest truths?! When Nick brought the song to the studio, they worked together as a band on it, and Johnny Taylor adds his own perspective when he says:

Without you always wanting it to, this song gets under the skin like a knife and stays with you for days. But really I think it expresses the frustration, which is perhaps that of not being allowed to do something, waiting in line, or just the sheer impatience of what it is to be a human being on this planet.

Listen to “Do It Now,” our Song Pick of the Day, and watch the compelling video that always puts a smile on my face:

The Horn · Do It Now

Connect with The Horn and add “Do It Now” to your playlist as we add it to our #glamglarepick playlist on Spotify and AppleMusic, and enjoy listening to the entire EP: